Whipped Buttercream Frosting is the best frosting ever! This flour frosting (ermine frosting) is made without powdered sugar. It has the rich creaminess of a buttercream & the light, airy texture of a whipped cream frosting without being too sweet!

This Whipped Buttercream Frosting recipe pretty much blew my mind. I'm not a big frosting person; most buttercream frostings are just ok, and I can take them or leave them.

Well, this buttercream frosting is amazing, and it uses (are you ready for this?) granulated sugar!

Yep! Regular, old granulated sugar. So, if you've ever wondered how to make frosting without powdered sugar, this is it!

Don't worry - it's not gritty at all. In fact, this ermine frosting has the texture of a light whipped cream with the flavor of a sweet, vanilla buttercream.

It's honestly the best frosting (buttercream or otherwise) that I've ever had. It's sweet but isn't overwhelmingly, make-your-teeth-ache sweet.

I've put answers to a lot of the questions I've received in the recipe notes. Please take a second to read through those notes before making the frosting.

How to make frosting without powdered sugar

Step 1 Whisk the milk and flour together in a small heavy saucepan before beginning to heat.

Step 2 Once combined, heat the mixture over medium-low heat until it has thickened. At this point, it should be the consistency of a thick paste.

Step 3 Remove from heat, and stir in the vanilla extract.

Step 4 Let the mixture cool to room temperature before continuing. This step is key. If the mixture is warm, it will cause the butter to warm up, and you'll end up with a thin, runny frosting.

Step 5 In a separate large bowl, cream the butter, sugar, and salt together on medium-high to high until light and fluffy, about 5 minutes. Be sure to scrape down the sides to avoid gritty frosting.

Step 6 Add the completely cooled milk/flour mixture to the beaten butter/sugar mixture, and beat on medium-high to high for 5 minutes. It may look separated at first, but keep whipping the frosting until it is light and fluffy.

This recipe has been posted for nearly 10 years. During that time, I've made and re-made this frosting countless times to be able to answer the thousands of questions that I've received. Here are some answers to the most commonly asked questions.

How much frosting will this recipe make?

The recipe will make enough to frost a 2 layer 9-inch round cake or 24 cupcakes.

Do I need to chill the frosting?

I recommend chilling any unused or leftover frosting because of the high dairy content.

What can I use instead of powdered sugar to make frosting?

This recipe uses granulated sugar instead of powdered sugar to make frosting.

Can I make this with nondairy milk?

I've used almond milk to make this frosting, and it worked well.

What type of milk should I use to make this frosting?

I've tried this recipe with skim milk, 1% milk, 2% milk, whole milk, and nondairy milk. I've successfully made the frosting with all of those types of milk. However, using whole milk will give you a richer, creamier frosting than using skim milk.

Do I have to use salted butter?

Can I use clear vanilla?

Can I use another type of flavoring?

You can! Feel free to substitute another type of flavoring or extract for the vanilla.

Can I use food coloring?

You can! I've used both gel and regular food dye. Both have worked well. If you're going to use a large quantity of food coloring, I would recommend a gel to avoid making the frosting runny.

Can I double the recipe?

I've doubled this recipe. It filled my 5 quart stand mixer, so be sure to use a larger mixing bowl.

I use regular granulated sugar. Using a larger grain (natural) sugar can give you gritty frosting. If you're worried about the frosting ending up gritty, you can give the sugar a couple of zips in a blender or food processor to break it down.

Can I use vanilla bean paste?

Can I freeze the frosting?

I've frozen cupcakes that were frosted with this frosting. They froze and thawed beautifully.

What flavors of cake go well with this frosting?

This frosting has a light, sweet vanilla flavor that works well with a number of cake flavors. Here are a few ideas!

Can I make this frosting in other flavors?

You can! Here are some of the different flavors of this frosting that I've made.

If you’ve tried this whipped buttercream frosting recipe, don’t forget to rate the recipe and leave me a comment below. I love to hear from people who've made my recipes! 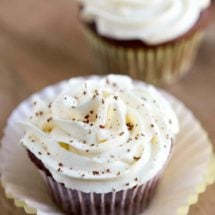 More frosting recipes that are made without powdered sugar!